A Better Way to Manage Farm Budgets and Risk (Updated)

ADM recommends GrainBridge to track farm financials throughout the year.
May 9, 2018, By Doug Roose, Director of ADM Producer Origination

Your operation has many financial moving parts, from input and land costs to projected yields and crop insurance—and they’re all connected. A change in one factor changes your whole outlook, yet recalculating with manual methods can take hours. (Learn more about farm financial planning in Episode 2 of our podcast, In the Driver’s Seat.)

To solve this stressful puzzle and help you make better decisions, ADM recommends GrainBridge. It’s free software offered at GrainBridge.com—and it gives you a total view of your farm’s financial picture on a daily basis.

“If a farmer did nothing else but enter their information, keep it current and look at it once a day, GrainBridge would improve his marketing tremendously.”
– Bernie Spindler

“There are three things moving every day for a farmer: yield, price and cost of production,” says Mark Frank, President of GrainBridge and a Nebraska “farm kid” who co-developed the digital tool. “The system brings those together in one place so you can monitor your financial changes every day. You can make better decisions on grain marketing, cash sales, or crop insurance based on those moving components.”

The risk management report in GrainBridge shows current profitability of each commodity and percent hedged.

Bernie Spindler, an ADM Grain Origination Specialist who also is involved in his own farming, has used GrainBridge to manage his operation for two years. He starts by entering his costs—variable expenses per acre and farm overhead—then enters what he knows about his revenue numbers: target price, and current cash sales and futures options. Then every day he checks his GrainBridge summary for a snapshot of three meaningful numbers: current revenue, target revenue, and the difference between them—e.g. smart grain sales he needs to make.

“GrainBridge allows me to track the daily revenue returns I’m looking for, versus the current return if I sold all my new-crop bushels today. It gives me a better feel when the markets turn lower or higher,” says Spindler. “I think a lot of farmers market their grain based on dollars per bushel, not gross dollars. By working in GrainBridge, you start looking at it from a different perspective—hitting total net revenue.”

Another key number that GrainBridge lets you plan around is crop protection. Entering your insurance terms, you can scenario-plan during the crop year as yield projections change and markets react to crop damage.

“If there’s a weather event in July and you have revenue protection at 85%, you can instantly run a what-if analysis based on new prices and yield combinations,” says Frank. “Having that crop insurance component built in helps a farmer understand why he should maybe be selling grain during those weather events.”

GrainBridge shows details of cash, brokerage, and insurance payments to create a total revenue estimate—for soybeans in this report.

Along with surviving the current crop year, GrainBridge can help plan an operation up to four years in advance by projecting costs, production, and income.

“Let’s say a farmer wants to start booking some 2019 fertilizer and signing longer-term cash rent leases,” Frank postulates. “He can start building that budget to see his cost of production and if his futures or cash market is at a profitable place. He could use the system to make sales farther into the future to help lock up profits.”

Spindler agrees that GrainBridge supports confident planning. He typically forward markets half of his soybeans, which paid off well this year prior to the market’s recent price drop. His strategy means he’s just $2,000 away from hitting his target farm revenue for this year.

6 Things you can do in GrainBridge

5. Stress-test your business with variables in yield, insurance, and market prices.

“If a farmer did nothing else but enter their information, keep it current with their sales, and look at it once a day to see how the market affected their overall position,” says Spindler from experience, “it would improve their marketing tremendously.” 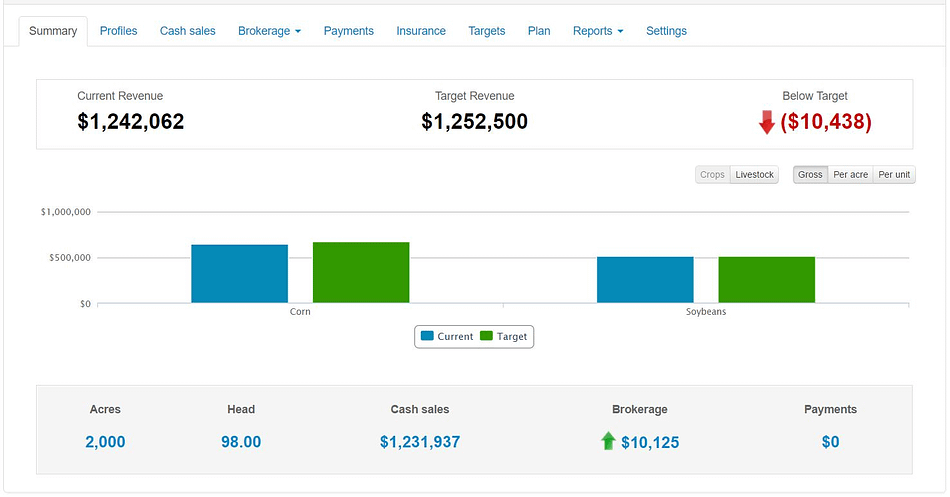 Logging into GrainBridge, you’ll see your current revenue in comparison with your net revenue goal, and a difference that provides guidance for remaining grain sales.

While GrainBridge lessens the stress of juggling multiple spreadsheets, it doesn’t force you to manage things in a new way. It runs things your way with better organization. And new features are in store that bring extra benefits to ADM customers using GrainBridge.

“We’re strong proponents of tools that help producers make better decisions—and GrainBridge is a great platform,” says Doug Roose, Director of Marketing at ADM. “We think it has great value helping farmers cope with the stress and volatility of markets and other moving parts.”

There’s no charge for GrainBridge, and no credit card or personal identification numbers are required to create an account. The information you enter is protected with bank-level security, while allowing you to forward reports or share administration with people you designate.

For more information, or to download the cloud-based app on any laptop or mobile device, just go to GrainBridge.com. You’ll quickly see how integrating all your financial data in one place gives you better control.

“We’re all human and we do a better job managing our lives and emotions when we deal with the known versus the unknown,” says Frank. “If you can run the numbers and review them in the evening, it can help bring some peace of mind.”

GrainBridge use is subject to accepting the GrainBridge User Agreement prior to use.

From early crop-year planning until your money’s in the bank, we pledge to be the best grain marketing strategists you can find. Ask for ideas anytime.

We’re specialists in driving down nutrient costs through forward pricing and direct purchasing. Let us help you build better margins into your bottom line.